Once Upon a Time “Dark Swan” Premiere RECAP 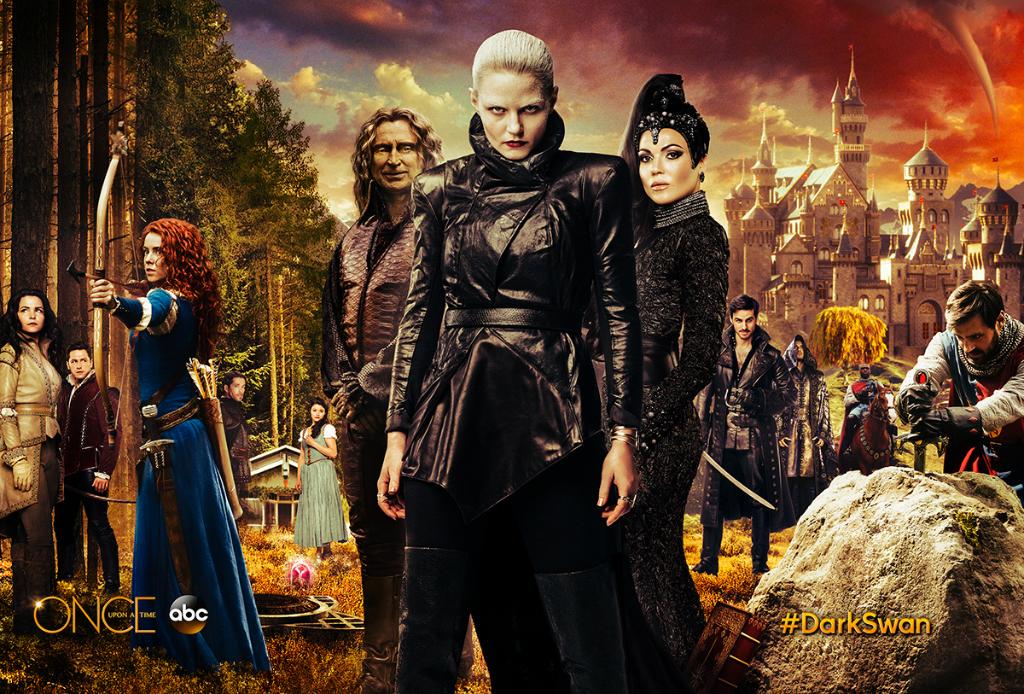 It was a long hiatus, but we made it.  Oh how I’ve missed the people of Storybrooke; Emma and Hook, Snow and Charming, Regina and Robin, even Henry! Right out of the gate these guys were steadfast on their quest to keep Emma from going to the Dark Side.  And we met some new characters along the way: Merida and her Wisp, King Arthur, Merlin (who apparently moonlights at a movie theater) and, of course The Dark Swan (cue the organ *dun dun dun*).

After a wee little Emma had a run in with Merlin, the season five opener introduced us to the land of Camelot with King Arthur (Liam Garrigan) looking gallant as ever, about to perform the legendary act of pulling Excalibur from the stone.  Along with Lancelot, who we met last season when Mary Margaret & Emma were wrongfully jailed in the Enchanted Forest, he quite easily slid the sword out of the rock. However in classic OUAT fashion, this fairytale wasn’t about to wrap up so easily, not without of a little twist first.  Excalibur was missing a key part, its blade.  And what you might ask is this blade? Why it’s none other than the Dark One’s dagger!  These writers never fail to surprise me with their twists on our conventional fairytales.  I’m still not over Rumpelstiltskin being the one who sent Cinderella to the ball, and also being the Crocodile and the Beast.  Love it, love it, love it.

Anyways, back in Storybrooke we’re right where we left off all the way back in May with the Charmings, Regina, Robin, and Hook standing in shock after Emma was consumed by the darkness.  The look on poor Hook’s face staring down at that dagger, his heart clearly broken, pained me (Oh Killian c’mere let me give you a hug).  But have no fear this villian-turned-hero was ready to save the day, attempting to summon Emma.  But alas, as Regina put it “She’s not in this world” and cannot be commanded there. [Side bar: Colin O’Donoghue’s hair in this scene was the definition of perfection]

The gang (minus Emma) heads over to Gold’s where the Apprentice is still alive.  Am I the only one that thought he died after that Merlin reveal in the finale? No? Ok, well it doesn’t matter because he’s actually dead now, but not before he could give them a magical wand that can send them to wherever Emma is.  Just one catch: it can only we wielded by someone who has both light and dark magic. Regina, believing she is the best bet, gives it a try – and fails.  Has Regina gone too soft?  Hook thinks so

“You’ve got the fire, love. But not the blackness, not anymore”

Bless you Hook, defending Emma and trying so hard to get her back, I commend your passion and ambition, Captain.  Turns out the man for the job is a woman, Zelena.  To the underground asylum!  Poor Zelena, locked up, preggers, powerless- kidding, the witch killed Neil! Stay away from her! But the gang clearly hasn’t learned their lesson.  They confront Zelena and she agrees to open the portal. Regina quickly comes to her senses, realizing her sister cannot be trusted, even with Emma’s well-being on the line.  But this little rift between siblings isn’t going to stop Hook from getting Miss Swan back into his leathery embrace…

Did I mention Gold is still in coma? Well he is and Belle is of course worried about him (how has she not realized he’s a lost cause??). The Blue Fairy shows up to reassure Belle, giving her a rose – yes that rose – which is enchanted to be, well, a heart monitor.

Meanwhile in The Enchanted Forest (Camelot?), it’s Emma versus the devil on her shoulder aka Rumpelstiltskin, in full crocodile mode. Rumple, who is basically the invisible welcoming committee to all new members of the Dark One Club,

follows Emma through the forest where she bumps into Merida.  Let’s give a warm welcome to Merida, the girl from that Pixar movie no one over 4 years old went to see.  Truth be told, I have seen Brave. But honestly in the grand scheme of all things Disney/Pixar, I would rank Brave quite low.  Merida however is a very interesting character I must admit.  She’s strong, brave (sorry), independent and much like Frozen’s lead, Elsa, love interest-less.  A female character not being tethered to a love story is a new and recurring theme in Disney movies and while I do love a good budding romance, it allows the character to prove their individuality.

But I digress, back to OUAT, Emma follows a Wisp which, as disclosed by Rumple, can lead her to Camelot and eventually Merlin.  Merida is after this Wisp as well but catches it first.  This is Emma’s first test of darkness. She fails the Dark One Test (and Passes the Savior Exam), ignoring the Rumple on her shoulder, by letting Merida go.  In true Merida fashion being accepting and welcoming to all, she offers to help Emma by taking her along to the Hill of Stones which can direct her to Camelot.   The lassies begin their trek, but stop for a quick nap before they get there.  Emma speaks to Rumple, her imaginary frenemy, as Merida sleeps beside her, and by sleeps I mean totally not sleeping.  Spooked by Emma’s conversation with no one, Merida ditches.  Shortly after Emma realizes this and chases after her.  Emma finally catches up to her (Merida must be one quick Scot because it was just the middle of the night now it’s day, took Emma long enough) at the Hill of Stones.  This is Emma’s second test of darkness, but this time it won’t be as easy…

In Storybrooke, Hook enlists the help of Henry (a little Stepfather-StepSon bonding time?) on his no-holds-barred mission to reunite with Emma.  To the underground asylum (again)!

They make it past the front desk (the old “oops I spilled my soda all over you” did the trick) and to Zelena’s room. Unfortunately history repeated itself for our sweet naive Killian with the Wicked Witch making things (momentarily) even between she and him, cutting her cuffed hand off!  With the magic-hindering bracelet off, Zelena, along with the Apprentice’s wand, disappears in her infamous cloud of green smoke.

Hook and Henry are scolded by Regina like little boys who have misbehaved, except Hook has reached his boiling point.  He accuses Regina of purposely slowing down the rescue mission.  This new heated rivalry between Regina and Killian is unexpectedly entertaining.  O’Donoghue and Parrilla brought such passion and ferocity to their spats in this episode it reminded us that these two people care deeply for Emma (Yes, Regina cares too #SwanQueen).  Before the fight reached its peak, mediator Mary Margaret steped in to put everyone in their place.  So where did Zelena go? Why the center of town of course! Because exciting face-offs can only happen there!  Zelena, with Robin in a Force-ful chokehold demands a trade: the wand for Robin.  Regina agrees to the exchange allowing her sister to open the scary green portal in the sky.  Thankfully the magic from the wand subdued Zelena long enough to cuff her once again (sorry not sorry, Wicked Witch).  The gang rushes to Granny’s, to use it as their own personal Magic School Bus.  With Emma’s baby blanket in tow, the gang along with Belle, Roland, baby Neal, the dwarves and Granny, get hurled up into the portal…

Emma, on the brink of letting in the darkness, with Merida’s heart in her clutches, is interrupted by Hook (and her family).  This scene, like many between Hook and Emma is so honest and beautiful, adding yet another well written page to their love story. Hook, trying to divert her attention from the darkness, desperately wants her to believe in herself as he does in her…

“Heroes & Villians, together, for you, because of you…If we can overcome our demons, then so can you.”

This heartfelt plea disconnects Emma from her inner demon (Rumple) thereupon pushing Merida’s heart back into her chest and falling into Hook’s long overdue embrace.

After reconciling with Merida (who is one seriously forgiving lass) Emma reunites with her parents who offer her the Dagger.  She refuses. Not wanting to have too much power, she gives it to Regina, trusting that she will do the right thing if she should ever go Darkside.  The gang, now finally whole again with Emma, return to Granny’s which is now right smack in the middle of the Enchanted Forest.

“Why Camelot of course.”

The horns blow, announcing the arrival of King Arthur to his fit-for-Disneyland castle, followed by basically the entire town of Storybrooke, led by (*crosses fingers* future King and Queen) Emma and Hook.

*The exact words that came out of my mouth, unfortunately I was right…

Back to Storybrooke! The unconscious gang, once again sans Emma, awake confused and dressed to the nines in classic fairytale costumes at Granny’s.  Their memories are wiped, again.  They can’t remember what happened when they were in the Enchanted Forest, again.  “Where’s Emma” Hook, clad in his pre-Neverland outfit, asks what we’re all thinking.  Enter Emma, in all black with a cold as ice attitude and dead eyes. What happened to her?

Anyone else get chills from Jennifer Morrison’s performance in this scene?  So cold and detached and full of, dare I say it…evil. Sadly, Sneezy got a bit sneezy and Emma turned him to stone, leaving the room frozen in fear.  Even her true love stood in shock

“Emma, why are you doing this?”

“Because I am the Dark One”

She exits in a cloud of Black Smoke…

The Dark Swan has officially risen…