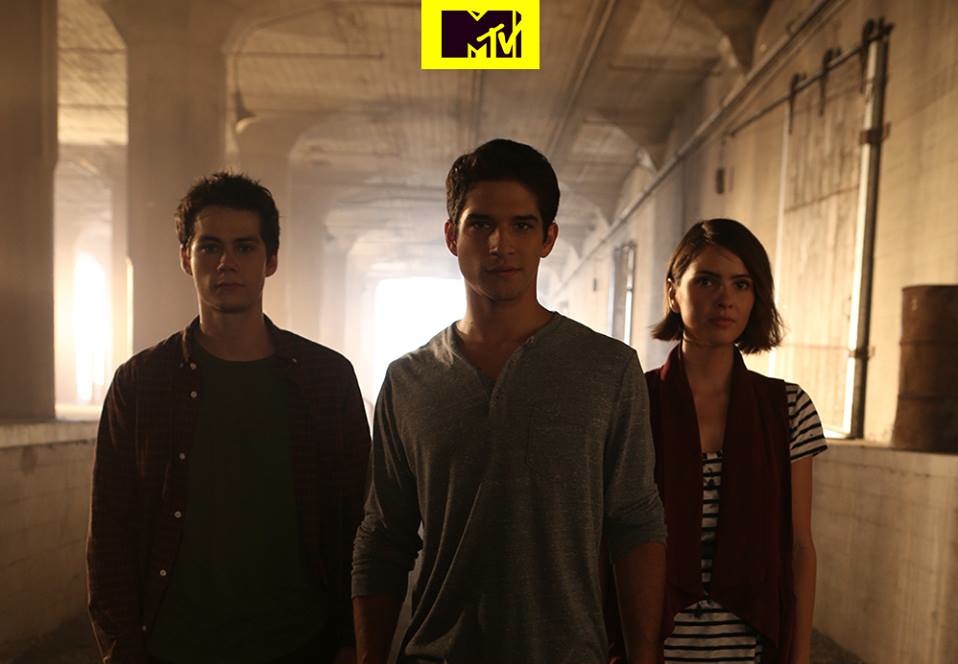 After a five month hiatus, everyone’s favorite werewolf melodrama returned last night revealing the aftermath of the Pack breaking first half of the season.  Teen Wolf picked up just hours after the end of 5A with the rise of Theo’s Chimera Crew, Liam in shock following the “death” of Hayden, Scott’s alpha status deteriorating, and Sheriff Stilinski knocking on heaven’s door.

Yes the long autumn without our beloved Lycan Teens and one impossibly adorable Stiles has come to an end, winter has arrived and I couldn’t be happier.  Midseason is honestly the best time of year.  Everybody knows the back half of 24 episode seasons are always better than the first 12.  Not to mention midseason replacements on the major networks AND the return of pint sized cable masterpieces from AMC, HBO and Starz.  But lets just talk MTV for now.

Teen Wolf is one of those shows that excels in reinventing themseleves each season.  Normally a series first season introduces characters, the setting, sets the tone, and acts as a solid foundation to allow growth (both in episode count and story).  Most dramas that have gone on as long as Teen Wolf (72 episodes thus far) have prospered because they remain true to form, continuing parallel to that foundation that was built in the beginning.  Shows such as The X-Files, Supernatural, Bones, Grey’s Anatomy that have greatly surpassed TW’s run have prospered because they stay true to the tone and atmosphere that drew fans in to from the start.  Sure they “keep it fresh” and continue to entertain loyal viewers week after week but none ever truly catapulted their show into new territory like Teen Wolf has.

If you compare a season one episode to “The Last Chimera” you would feel as though you are watching an alternate reality.  The show, put very simply, is about the trials and tribulations of teenagers whom (like every teenager ever) are at a time in their lives when everything seems to change.  The creative minds behind the show took advantage of this (whether they realize it or not) and made the ever evolving landscape of the show believable as teenagers themselves evolve drastically.  Think about yourself, if you compared your freshman self to your senior self would they not appear strikingly different?  It could be merely the surface appearing taller, slimmer, thicker, more confident, less enthused, revitalized, or worn out.  Or it could be that the way you saw the world, the way you perceived it changed within those 4 years.  You may have had more experiences, learned more, became worldlier, more open minded, possibly more cynical or pessimistic because of trying times.

The fact of the matter is that much like an average teenager transforms over the course of their adolescence, Teen Wolf mirrored this (with a supernatural twist have you) going from a goofy, innocent show about werewolves to the mature dissection of human relationships, delving into the dark sometimes haunting parts of ones mind all the while dealing with the power struggle between those with greater ability and those with only their righteousness to defend themselves.

Phew – that was a mouthful.  But I digress, let us return to this episode specifically rather than the series as a whole.  The hour concentrated on our original three – Scott, Stiles and Lydia and their crises of mental states.  We last saw Lydia being seized by Theo via his claw piercing her neck, gaining control of her mind.  As we have seen in the past this werewolf trick can leave humans incapacitated (or worse) if performed for longer than a few seconds.  In Lydia’s case it was a lot worse.  We finally got the answer to our season long question of how Lydia became catatonic and a resident of Eichen House.  Theo’s prolonged journey through Lydia’s brain left her near about comatose.  Eyes wide open and mute for much of the hour, Lydia was defenseless and on the brink of mental break (but as we know she won’t break but rather evolve – going full banshee outside of the asylum).  Parrish finds her in the middle of woods using his hellhound abilities (?) and takes her to the hospital where her mother awaits.  Poor Mrs. Martin, she only found out about what really goes on in Beacon Hills a few days ago which is why her emotional reaction towards Stiles is completely understandable although it couldn’t have come at a worse time for him.

Stiles has been through more than any character on the show.  Before Scott even got the bite, Stiles was already treading close to the darkness.  While the first season never truly delved into Stiles’ past, season two revealed our favorite spunky sidekick had a painful upbringing.  His mother passed away when he was 8 leaving he and his (sometimes alcoholic but always loving) father alone.  But thanks to the McCalls both father and son managed to make it through those sorrowful times.

After playing sidekick/right hand man/loyal friend/brother amidst the roller coaster ride that was Scott’s first year as a werewolf, Stiles unfortunately was thrown into the supernatural insanity in season 3 being possessed by the Nogitsune.  Nearly being killed by the demon that consumed his body, Stiles does overcome this seemingly impossible oppressor with his personal strength (his intelligence, fortitude, and hope).  However the boy that made it out of this alive was no longer the spunky sidekick but a man with damaged soul.

That soul, that boy, our Stiles, reached his breaking point in “The Last Chimera” as his father laid dying in the hospital plagued with an unknown poison from Theo.  Alone in the waiting room, the image of a distraught son, Stiles, sits alone.  Melissa soon after reassures him that his father is okay, that he survived surgery.  The realization that he isn’t alone on this earth, that he hasn’t become his worst fear, an orphan, is portrayed flawlessly by Dylan O’Brien whose display of Stiles’ fearful grief was utterly expressive and poignant.  This heartbreaking moment was, as expected, brilliantly acted by O’Brien.  The man, the myth, the future legend.  I could honestly go on for days – FOR DAYS – about my love, admiration, and appreciation for Dylan O’Brien but I won’t.

Oh who am I kidding, of course I’m going to.  But I’ll keep it short.

From day one Dylan O’Brien has been a stand out performer.  From falling upside down, surprising Scott in the pilot to professing his love for Lydia and fear of life without her to his jaw dropping performance as the Nogitsune until now with his painfully severed ties with Scott, Dylan has made this character one of the best on television.  Who would have thought that that over caffeinated, buzzed cut young man teetering behind Scott would become the series lead?  Yes you heard me right, I said that – the series lead.  Go ahead try to debate me on this in the comments but I will stand by this statement.  This show is Dylan’s.  Fight me.  They call him, rather, they award him as the “Scene Stealer”, which was true for the first 2 seasons.  Any scene he was in became his own.  Some he only had a few lines or just a single quip and yet when the episode ended, you couldn’t help but remember moments with Stiles.  Moments that affected you, whether it was because he made you laugh out loud or tense up with (sometimes tearful) emotion.

Dylan O’Brien plays one of the only surviving humans on the show.  One could portray this character as the pawn, the controllable piece in the game that merely moves the competition along but Dylan plays Stiles not just as The Human on the show but A Human.  He makes Stiles not only believable but understandable, fully formed, layered and genuine,  with his often breath taking performances during Stiles’ most emotional events.  He separated himself from the pack (pun totally intended) as he displays a much more matured style of acting.  I hate to say this as I know it’s going to come off offensive, but I need to say it to explain my point: the other actors on the show have fallen prey to the formulaic melodramatic style of acting that often comes off juvenile and soapy.  Contrastingly, I’ve found that Dylan O’Brien brings a more broad spectrum of emotion, having the theatrical ability to tell epic stories and vast emotions in the time he is present on screen more so than his Teen Wolf peers.  I don’t know what you would attribute this to, whether is his work outside of the show that have given him artistic exposure and experience or if it is just a god given talent O’Brien possesses.  Either way he has managed to take his “Scene Stealing” another giant step forward to what I consider Series Stealing.

Rant complete.  Shall we return to the episode?  Ok.  Now onto Scott.  The midseason premiere also featured the fracturing of the Pack leader’s Alpha status.  Staring into the mirror trying to conjure up his inner Alpha and glowing Red eyes, we watched as they flickered, unable to burn brightly.  His pack was no longer the Avenge-ful/Justice League/Supernatural powerhouse that they once were.  They were broken, each member not only led astray but led on paths divergent from Scott.  His red eyes reflect his leadership and strong hold on the victorious Pack to which he created being a True Alpha.  But with the Pack being comprised of an MIA Kitsune, a catatonic Banshee, Malia, and a veritable Sherlock who has lost faith and trust in his leader, Scott was barely an Alpha anymore, nevermind a True Alpha.  This disheartening reality was only made more demoralizing by the realization that his sidekick/right hand man/loyal friend/brother was none of that anymore.  Stiles tackles Scott at the hospital and in that moment there was a shift.  A shift not only in how this season will go on from that moment but a shift in their relationship.  Never have they fought.  They have disagreed, they have argued but never fought.  For Stiles to have reached a point where he felt the need to physically attack the friend who has been by his side his entire life means that coming back from this loss of trust may be impossible.  Even if they make it past this “break up” their relationship will never be what it once was.

Scott and Stiles (Tyler Posey and Dylan O’Brien) share a look after they are picked up from the floor.  It is a look that is only shared between strangers.  Scott was both deeply hurt and disappointed in himself that his best friend attacked him screaming “Where were you?!”  While Stiles looked at this animal that he once called his brother.  They were both unrecognizable versions of each other – Scott was weak and ashamed and Stiles was broken and vengeful: characteristics never once used to describe these two friends.  They continued to work alongside each other for the sake of Sheriff Stilinski but bitterness from Stiles remained creating a visible distance.

Teen Wolf manages to reinvent themselves each season and in the case of this winter premiere they proved they have the ability to up the stakes and darken the tone amid a single season’s arc.  I’m really looking forward to the twist, turns, action packed-claws out fights, pack politics, and the return of Chris Argent’s badassery 5B will surely provide but also writing about it! Can’t wait! Until next week…