Emotion, ambition, teamwork and a whole lot of screaming drove this week’s episode of Teen Wolf, making “Lie Ability” one of THE best of episodes of the whole series.  The hour’s intensity alone had me at the edge of my seat, but with the added layer of Stiles’ romantic quest I was ordering a casket because I was straight up DYING.  I don’t even know where to begin.  Should I start with Parrish’s fiery brawl with the Chimera pack? Or get straight to the moment where I was convulsively sobbing over Stydia. OR do I go all the way back to “What the hell is a Stiles” where it ALL began?  You know what, let’s just do all three because why not?

Parrish is the single most badass ass creature on Teen Wolf!  But what even is he? Yes, I know, a Hellhound but this isn’t one of those invisible Rottweilers from Supernatural, Jordan is a flame broiled BEAST glowing with hellfire.  Also a pipe straight through the heart doesn’t kill him? Color me  impressed.  That Chimera Pack is becoming quite the bother, when will they realize they are just a bunch of untrained puppies? You think you can take on a Hellhound, let alone Scott’s Pack? 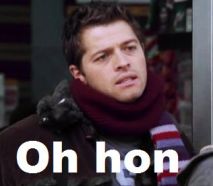 But on a serious note (because lets face it the rest of the review is going to be serious), watching Stiles watch Lydia being taken by Dr. Valak was awful.  He looked so hopeless and yet there was this drive in his eyes like he was KNEW he was going to save her.   Unfortunately, Parrish threw a burnt Chimera on him, so the whole “save the Banshee, save the world” was going to be a bit delayed.  Meanwhile Parrish…

Dr. Valak led Lydia through a locked hallway leaving Stiles on the other side banging on the door, screaming for her.  My heart just breaks for Stiles.  Nothing in life comes easy for him.  He’s human, he has no supernatural ability to bust that door down, it’s yet another obstacle keeping him from saving his girl.  He’s angry and terrified, using all his strength to get through this door but he just can’t.  Theo can however (finally the Were-Asshole is useful).  Stiles may loathe him, but there was an undeniable moment of gratitude after he kicked that door down.

Stiles main goal in life is to keep his friends safe and alive.  He is man who is full of love.  He’s smart, independent and confident but he also wears his his heart on his sleeve. This could be a weakness but instead, in Stiles’ case it’s what DRIVES HIM.  He loves his friends, but there is one of whom he loves more deeply than the rest.  He may not know what is going on, where Lydia was taken, or how to navigate through the tunnels but he is driven by love so much so that those unknowns do not scare him.  He will fight for Lydia and he knows he will find her.  How do I know this? Well, there are two reasons: one is the history of Stydia, if you will, and the other is Dylan O’Brien, who portrays Stiles in such a way that the character is always understood.

I can’t do a play-by-play of the long story that is Stiles and Lydia but what I will say is that from Day 1, from the pilot, Stiles Stilinski has loved Lydia Martin.  It started as a one-sided basic “overzealous boy loves popular girl” but slowly and beautifully it transformed.  As Stiles grew so did his true love and devotion to this girl, his girl.  There were clear steps in this transformation.  It began with awkward encounters, then genuine worry for her well being, and excited displays of affection (of which she finally acknowledged).  In season 2 we saw a major turn but it was no 180º because it was believable, and yet still surprising and eye opening.  In what is now possibly the most iconic Stydia moment, Stiles bares his heart to her, confessing his deepest fears because she needs to finally hear it…

Not only did we now grasp the amount of love Stiles has for her but we also saw Lydia reciprocating some feelings.  The one-sidedness of this relationship was slowly but surely coming to an end.  Stiles and Lydia formed a bond that we saw evolve into a iron clad relationship that was based on trust and mutual respect.  These two deeply cherish one another and while it has been platonic thus far that didn’t make their love any less true.  This four year history has been riddled with pain and suffering but their bond never withered but rather was strengthened.   With what these two have been through, what they have overcome together, the unwavering ambition and confidence that Stiles has in saving Lydia is not only believable but expected.

Before I talk about Dylan O’Brien and that scene that had me paddle boating through my house because I flooded it with tears, lets talk about the moments leading up to it…

First of all, can we just take a second to appreciate Liam Dunbar?  He is a gift.  Our little were-puppy was so adorably proud of himself when he took out those two guards.

Meanwhile Scott was having no luck with Meredith, really.  Did those two even accomplish anything during the episode other than the already known fact that Lydia was either going to die or kill everyone with her screams?  Then there was Malia who had her hands full down in the basement dealing with both an electrified Kira and two members of the Chimera Pack.  I really don’t like Tracy but Josh and Corey on the other hand seem like decent human beings…I mean chimeras.

Theo and Stiles were down in the tunnels following Lydia’s scent, but clearly didn’t get the memo that these tunnels are more of a maze.  If only Minho and Newt were here, they would have got to Lydia hours ago!   Stiles and Theo have another mini confrontation and questions I’ve had for a few weeks were now answered within one sentence…

Thank you for clearing that up, Stiles, supernatural teen dramas can get complicated sometimes.  His sass game was STRONG in those tunnels.  Theo may have been trying to prove himself but our boy was having none of it.  Bye Theo, no one cares.  In the end he was finally able to pinpoint exactly where Lydia was being held (“You’ll hear better, dumbass. Break it.”  Bless you Stiles.)

Is no one going to mention how seriously creepy it is that Dr. Valek has an underground operating room where he takes drugged up woman? No? Okay then moving on.  Just before Stiles and Theo bust down the door of the operating room, Lydia screams releasing an atomic force that rips right through Valek’s head.  Karma’s a bitch, ain’t it?  Teen Wolf never gets too graphic but this episode managed to push the envelope not one but two times.  And round of applause for the FX team! This reminded me of Breaking Bad’s explosive death but slightly more grotesque (in a good way).

Night in Flannel Armor, Stiles, rushes in after the dust settles to save his Banshee in distress. With the combination of a PERFECT LINE ” Lydia, please shut up and let me save your life.” and a PERFECT MUSIC CUE (Eric Arjes’ “Find My Way Back”) I was crying the most joyful of tears.

I think in this moment, when she smiles and nods, she has realized something that we have known since Day 1, that Stiles loves her with all his heart. And I believe this is also the moment where she opened her heart and let him in.

The shipper tears of joy began to dry and unfortunately they would soon be replaced with TEARS OF PAIN.   Stiles, physically supporting an ailing Lydia, stumbled through the tunnels until she couldn’t hold in another violent screech.  Right before she belts out her ear piercing scream, the Hellhound finally finds the Banshee.  He covers her and we are gifted with two stunning visuals of these two supernatural powerhouses coming together…

But wait, I need to finish what I was saying earlier (before we get to THAT moment up next)…

That other reason why I understand Stiles? Answer: because the man behind the hero, Dylan O’Brien.  I’ll keep this short because honestly I’ve already written out my praise for the man, the myth, the legend so it would all be a bit redundant.  But thanks to yet another episode widely featuring the struggles of Stiles, I have something to add to that DO’B rant.  Its all in the eyes.  What’s that cliche line? “The eyes are the windows to the soul”…? As cliche as that saying may be, it couldn’t define Dylan O’Brien’s acting better.

Stiles was the vision of a man in disbelief as he repeated “No no no. Come on Lydia.” But it wasn’t even necessary.  His eyes told the whole story: his soul was breaking.  Dylan O’Brien’s eyes were not his own in this moment, they were the eyes of an overzealous boy “literally losing his freaking mind” watching the popular girl he loved so deeply slip away.

But enough about Dylan/Stiles’ eyes.  Let’s talk about mine because in that moment my eyes were overflowing.  This isn’t one of those “omg I’m literally crying” when you’re actually not crying.  I was BAWLING.  The air was sucked from my lungs.  I was right along there with you, Stiles, anxiously waiting for her to breath.

This thought process seemed to be ravaging Scott’s brain as well as he stood by frozen in fear having a sort of of painful déjà vu watching the life of his friend and Stiles’ true love slip away. Lydia (after the LONGEST 10 seconds of my life) took a breath and opened her eyes.  My sigh of relief was so loud I woke the whole neighborhood and was also followed by EVEN. MORE. TEARS. Seriously I didn’t know I was capable of this amount of tear production.

Lydia looks at Stiles with weak eyes but full of the purest form of love and gratitude.

Goodbye forever, that was the final nail in my coffin.  My ship is sailing and I am drowning in a sea of tears. Thank you, Jeff Davis.