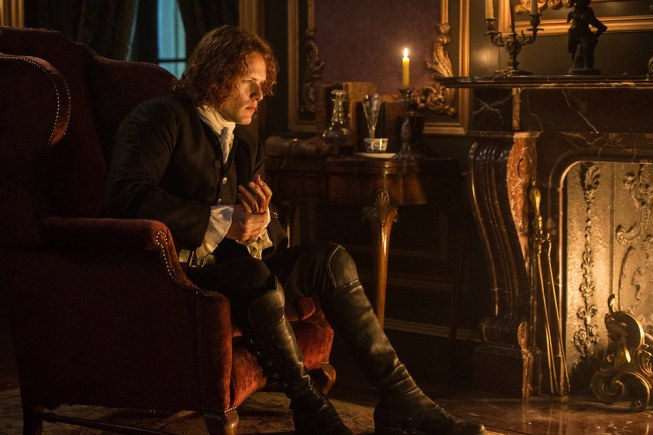 The second installment of the this très magnifique season broadened the world we were introduced to in the premiere.  Where the first episode set the foundation for the season as a whole, episode 2 kickstarted the Fraser’s mission to  “change the past to save the future.”  We were welcomed to Paris in 1744, a royal city unscathed by later revolutions where the women turned heads in their grandiose hand-stitched dresses and the nationalistic noble men sought reform (and also a good time at the brothel).  Just as we witnessed the slow ascent into complacency by Claire in Scotland at the beginning of season 1, here we watched as both she and Jamie adapted to a new world in France.  The two each made some new (and meticulously chosen) friends and began to settle into their new lifestyle.  This however was destined to be a difficult feat as Jamie’s internal suffering was proving to be an issue that would not just disappear overnight, especially if Claire’s newfound information about Black Jack was revealed.

First of all, the title card alone was gorgeous and within 4 seconds gave us a feel for the level of elegance and style this time and place in history had.  That first dress displayed we would later see belonged to Louise de Rohan (an 18th century  Desperate Housewife who happens to have been a real person in history). 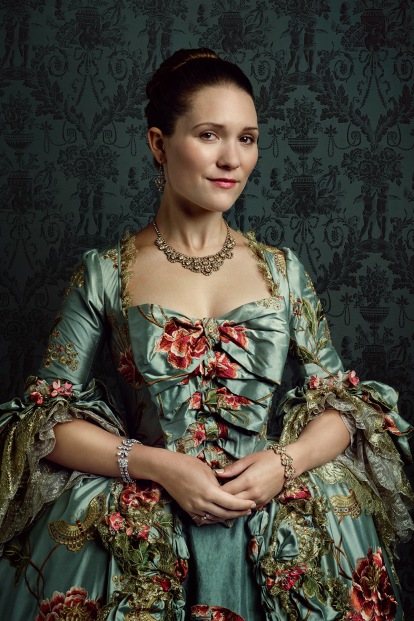 Where do I begin with this dress?! Costume Designer Terry Dresbach spoke at the recent Television Academy event about her process of designing and creating the costumes this season.  She detailed how she and her team created these fanciful and beautifully unique dresses, leaving me dumbfounded (the amount of time and passion it takes is insane!).  The season has only just begun and I’m already infinitely impressed by these dresses.  Louise’s particular dress exemplified Dresbach’s hard work, detail and creative genius.  The fabric encapsulated the look of Versailles in the 18th century; lush but groomed, colorful yet refined.  As I stare in awe of this dress I find myself drawn to the center of the bodice where the four bows seem to add a youthful flare to an otherwise mature piece. Whether it was their intention or not, the addition of the bows helped separate Louise from her uptight peers.  As we saw in the episode, Louise is quite the character, to say the least.  She’s immodest, carefree, and just a tiny bit scary; similar in someways to Claire.  Claire and Louis share the same level of self-confidence however Louise’s comes from a place of vanity whereas Claire’s derives from her need to protect and stand strong.

Next up is that RED HOT-DROP DEAD GORGEOUS DRESS Claire wore to Versailles. 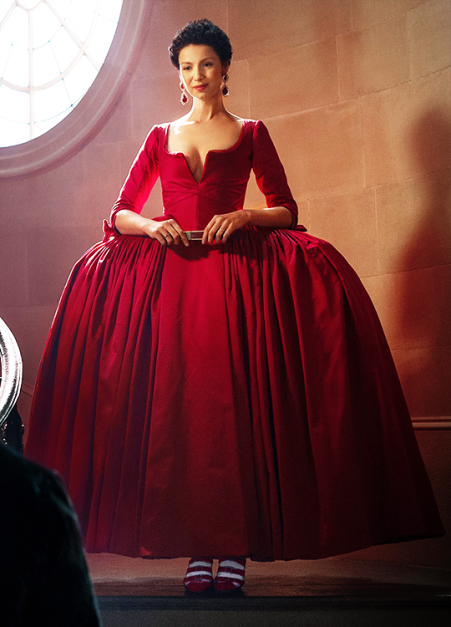 The color of this dress is mesmerizing.  It is the perfect RED.  It’s not a cheap cherry nor is it an aged crimson, it is a red that makes a statement- a vibrant scarlet rose.  Then there are the half sleeves that combined with the plunging neckline make this dress an absolute masterpiece of Victorian sex appeal.  Not to mention it was MADE for Caitriona Balfe who looks STUNNING, even with that hilariously wide rump!  The shoes and jewels cannot go unrecognized, of course.  There was  only a quick shot of the shoes but they sure as hell caught my eye and had me hitting the pause button to admire them. Where can buy them? I. Need. Them.  The earrings reminded me of Princess Diana’s signature blue earrings and by this I mean Claire looked like frickin’ ROYALTY in those ruby teardrops.  The ensemble, from head to toe, was equally as breathtakingly gorgeous as it was unabashedly sexy.

I visited the Artistry of Outlander Exhibit at Beverly Hills’ Paley Center and saw this dress in person. Can I just say: WOW.  It is a sight to see. The red. THE RED. I was flushed just looking at it.  My favorite part of this look was the shoes however.  I wanted to steal them right from the mannequin! Take a look! 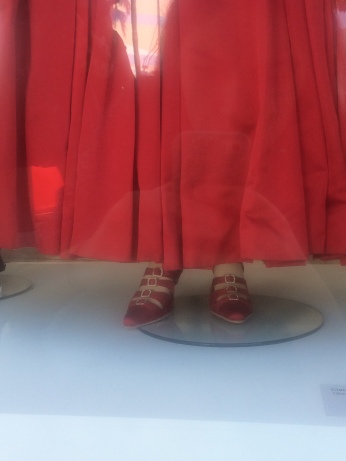 Last but certainly not least, THE DIOR DRESS! 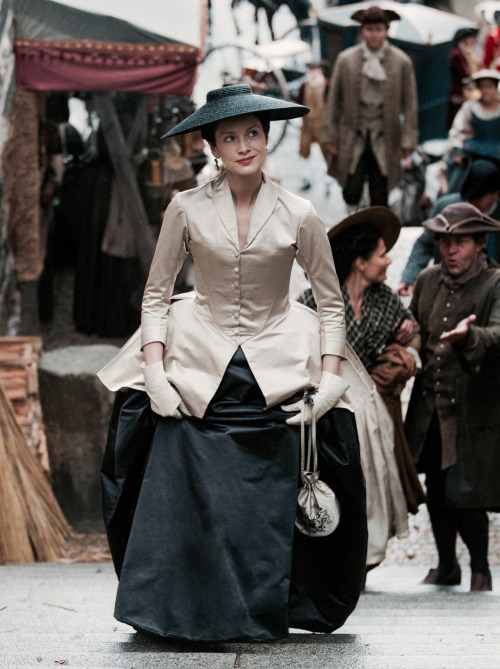 This was the first dress we saw Claire in in France (other than her Scottish garb she wore aboard the Cristobal).  Inspired by Christian Dior’s 1940s line of high society women’s wear, this dress managed to, quite literally, materialize Claire’s complicated history.   Dresbach spoke about her choice to design this unique dress for Claire saying…

“… Politics aside, It seemed logical to me that Claire would do in the 18th century the same thing that Christian Dior had done in the 20th century. He stripped the traditional 18th century riding habit of all of the embellishments and details and decorations all the bows the bells and whistles. He took it back to its basic Silhouette and that became the Bar Suit. I decided to have Claire look at the riding suit and do the same. It was a suit after all, something she would have seen as the most familiar garment in the 18th century. It was a garment designed for a practical function, and Claire is a practical woman.

So we just put Claire in a recreation of the Bar Suit. I have never had a costume so perfectly define a character and fit into a story so seamlessly before. I still marvel at how absolutely perfect it is. When I told Cait what my plan was she just broke into this huge grin . She knew the suit, knows fashion, and she could easily see where we were headed, and was delighted.

It is not an original design. It is a copy of someone else’s. I have never done that before, but it worked. It worked, because as I say ad nauseum, it serves the story.

We stayed as close as possible to the original, with the exception of the hat. I decided to go with black. I thought it looked better. I question that choice, sort of.  Maybe it was my subconscious need to put something of my own view in there.”

Though, “We Are Not In Scotland Anymore” was such an excellent episode that I can’t possibly stop here.  So I present my favorite moments…

First of all let us give a (virtual) round of applause to Sam Heughan for his impeccable timing and facial expressions because this scene had me cracking up laughing.  This season is proving far more humorous than I ever expected, I mean the dildos alone had me awkwardly giggling and that bathroom scene- what the fuck is up with the French? (Excuse my French about the French).    As the breed of Outlander fan that has yet to read the novel series (I want to so badly though) I have heard about this ex-girlfriend of Jamie’s before, thanks to tumblr blogs and spoilery interviews with the creators.  I assumed she would be the next Laoghire (that’s LEE-ree, if you are a surprised as I am by the spelling), a girl who foolishly believes she can drive a wedge between the indestructible Frasers.  But it seems she is merely a past fling who respects Jamie’s current relationship.  Then again, I haven’t read the books so I could very well be completely wrong about this!  Much like Louise,  Annalise has no filter and accosts Jamie just as he and Claire arrive at the party.  The exchange of looks and sheer awkwardness on Jamie’s part was portrayed perfectly by Heughan and Balfe, I must say. Just look at them…

A whole lot of drama and heartache is undoubtably afoot this season but for now I am truly loving the comedy that France has brought to Outlander.

“Your honeypot is bare!”

After witnessing Louise bare all as she got her nether regions waxed, Claire took note and gave into the French way of living.  Jamie’s reaction to this new hairdo, if you will, was priceless to say the very least.  “Your honeypot is bare” will surely go down in history as one of the best lines of the show.   One of the things that makes Jamie Fraser so great is his unwavering innocence when he is intimate with Claire.  We get to see the cheeky side of him where he isn’t a brute Highlander but rather an excited young lad who reacts to Claire’s body each time like it is the first time he’d seen a naked woman.  It’s downright adorable.  After feeling it, young Jamie so sweetly asks “What must it look like?” Claire replies in a way that only Caitriona Balfe could portray so perfectly with a hint of mockery and a whole lot of sexual domination…

Before You Go, Can We Talk About Jamie & Claire’s Relationship?:

I fear the day when I say that the Fraser’s relationship isn’t doing well.  As of right now it feels as though their relationship is indestructible, that nothing can penetrate the bond of true love.  Claire and Jamie however are being tested in season 2, as the repercussions of Jamie’s trauma are impacting their intimacy.  Outlander is labeled a “sexy” show for obvious reasons.  The sex scenes are like no other.  But what is so great about them is that they are not used as a mere tactic to make headlines or flood twitter with shocked reactions.  The sex scenes effectively leave viewers in need of a cold shower but also the act of this intimacy always has a purpose.  It’s never sex for sex’s sake.  There are clear motives for Claire and Jamie’s need for love making.  It could be consummating their union, or deepening their bond through the vulnerable act, or satisfying each other as a gesture of love and thankfulness of one another.  Sex was used in season 1 as a stepping stone to create and strengthen their love.  Now in season 2 the purpose is to not only reinforce their love but more importantly sustain a happy and balanced marriage.

With the horrible events from Wentworth Prison plaguing Jamie’s mind, intimacy is no easy task.  Since the invigoration that intimacy causes seems to trigger the nightmarish memories, sex is a tool the Fraser’s may need to learn to live without.  Season 1 saw Claire as the fish out of water struggling to find comfort and stability in a new world.  Now in Season 2 both Claire and Jamie are thrown into the center of a different country with a polar opposite cultural structure than the Highlands of Scotland.  They must not only learn to adapt to the French lifestyle but also overcome the strain on their marriage.

Thanks for reading! Slàinte! Au Revoir!