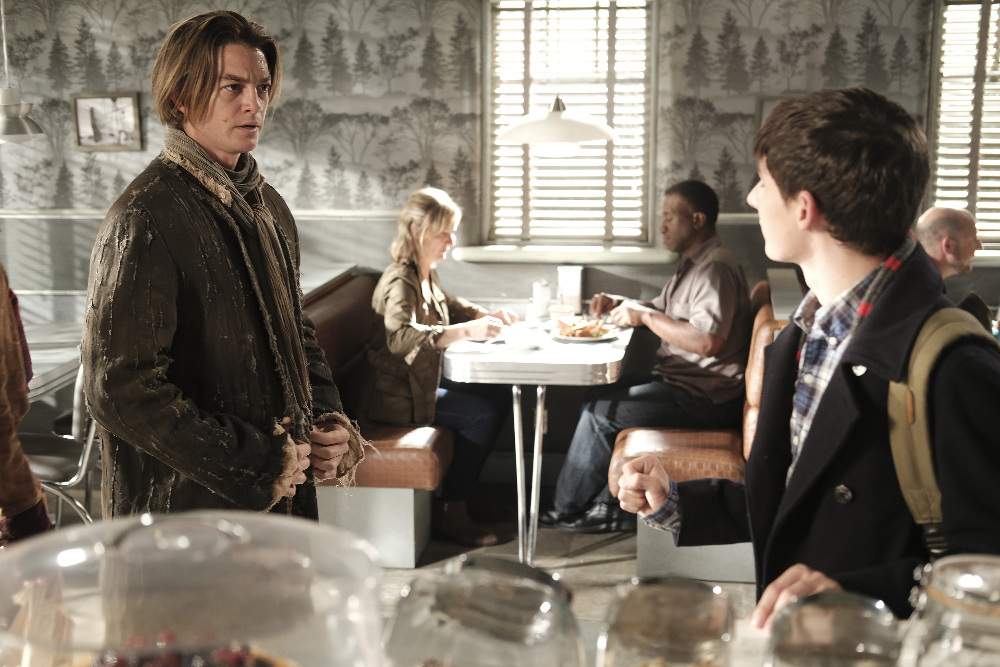 Once Upon A Time has brought to life Pinocchio, The Mad Hatter, Tinkerbell, and many other characters kids know and love. That is until now thanks to the misfits who populate the Land of Untold Stories. “A Bitter Draught” introduced the vengeful Count of Monte Cristo to the Storybrooke-verse, and in true OUAT fashion, this literary bigwig has ties to a few our favorite characters.

After a premiere that fell a bit flat in exciting viewers of the season ahead of us, the second episode made up for it tenfold.  Where “The Savior” felt like an extension of season 5’s conclusion, “A Bitter Draught” served as a sharpened introduction to the Untold Stories that lie ahead in season 6.  Harkening back to the structure of early OUAT episodes, this episode played like a vignette, telling an entire story of a well known character in the confines of 43(ish) minutes.  On top of that, OUAT once again exhibited their stellar casting choices, with relatively unknown actor Craig Horner breathing humanity into Edmond Dantes.

The Evil Queen has solemnly sworn she is up to no good, and with a little help from (a slightly reluctant) Zelena has begun the first steps of stirring up trouble in Storybrooke.  The Wicked Sisters take a trip to the mausoleum to cook up a spell that will create a barrier around the town so no one can escape.   Meanwhile, The Good Witch err- Regina has paired up with Henry, who exclaims that Operation Cobra Part 2 has commenced: Part 1 made her a hero, now Part 2 is where she gets her rightfully deserved happy ending.

Before The Count ascends into Storybrooke, Killian and Emma have a quick but necessary check in with one another.  As a Captain Swan fanatic it pains me to say this but after 4 seasons of building up this beautiful love story, season 6 seems to be preparing us for (*deep breath*) a breakup (*heart shatters*).   The premiere dropped a few classic TV hints of a rocky future, as Emma, for no logical reason, lied to Killian about her tremor and deathly visions.  C’mon Emma! He loves you! Is telling him about your problems THAT SCARY?! Stop building walls around yourself, Emma! Build bridges to your darling Hook! Please, us Captain Swan-ers will drown in a sea of tears if our ship sinks!

Belle enters Granny’s, to everyone’s happy surprise (“You’re awake!”), and is in need of a place to live.  Killian, chivalrous as always, quickly volunteers to assist Belle with her issue.  But this deed was not just chivalry, it was another stop on his redemption tour.  Killian Jones went through A LOT last season to say the very least and I find it so touching (and a bit heartbreaking) that he is still trying to better himself as a person.  He proved to everyone he was a good man and a hero many times throughout season 5 but that doesn’t mean the skeletons in his closet suddenly disappeared…and he is well aware of this.

We’ve always known Hook as the charming pirate with a heart of gold (and love for Emma Swan) but what we’ve also come learn about this man is that while he is confident in his flirtations, he carries a perpetual guilt.  Killian offers Belle the Jolly Roger as her new home, which she questions at first.  He explains to her, revealing the inner shame he still feels about his past…

“Long ago I tried to kill you at the Queen’s castle once…I failed.  But along the way I did something I can live with no longer, I laid a hand on you.  And there’s the matter of me shooting at you at the town line…I have a long road to travel before I can be someone I can be proud of.  Despite the forgiveness of others, I must forgive myself and I’m not there yet.”

This is one of the most honest and truthful statements ever made on Once Upon A Time and what makes it so much more gratifying is that it is said between an unlikely pair (these two have a slowly progressing relationship that I am loving and hope develops more -> this gif set is a nice reminder of that). On most shows, declarations of inner pain or love are expressed to the person they are closest to, the person they trust the most in the world.  In this case, it is a man opening up his soul to a woman he has wronged, whom he has no romantic connection to.  It speaks to the level of respect Killian has for the women in his life but also brings into question the status of his most important woman: Emma.  Does Emma know he holds this much guilt? Has he told her he still feels the need for repentance?   This goes back to my painful theory that the road ahead for Captain Swan will not be a smooth one (*shudders*).

Henry meanwhile, as the author, is in charge of finding people’s stories and is the first person in town to greet the mysterious and raggedy (aaand handsome) gentlemen.  This man, we would soon find out, is The Count of Monte Cristo as we cut to a flashback of his origin story aka the source material summarized in a 2 minute scene.  The Count enters his ball dressed much more elegantly than he is in Storybrooke and greets his guests.  The Baron [Danglers] happily thanks The Count for hosting the party and questions who he is.  He is Edmond Dantes, the fiancee of the woman the Baron had killed some years earlier. Revenge is nigh.  And nigh is now as Edmond wastes no time with the chit-chat and stabs the Baron, killing him. Ruthless.  (*whispers*) I love him.  As guests quickly exit in horror, who is left giving him a round of applause? Well me at home because I could already tell Craig Horner was flawless.  But really, it was The Evil Queen and her trademark maniacal laughter congratulating him on his first kill.  Impressed by his passion she gives him an offer he couldn’t refuse: the names of the Baron’s accomplices and in return he’ll be her personal hit-man.

Back in real time, Regina explains to the Charmings that the Count isn’t here to party, but rather kill them. We take a trip back to the Enchanted Forest (this is sometime after the Charming’s wedding but before Emma was conceived) to a ravaged village where Snow and Charming find a man, Edmond, the “lone survivor”, whom they offer a job at the castle. Those Charmings are too nice, right?  A handmaiden, Charlotte, arrives to clean Edmond’s wounds, he remarks curiously “Your eyes”.  I feel like this a literary reference I’m missing, maybe? Anyone? …Bueller?

The Evil Queen gives Edmond a bottle of poison to which he later drops into the Charmings’ wine glasses at dinner.  However Charlotte arrives (its her last night as their handmaiden) and joins in on the wine drinking.  Before they sip, Edmond quickly cuts in and insists they have a more celebratory drink.  Those eyes are too enchanting for him to let go of so easily.  Later on, feeling regretful

of his attempted murder, Rumpelstiltskin appears.  Past-Rumple can’t allow Edmond to stay in the
Enchanted Forest and eventually kill the Charmings as it would ruin his master plan- which we now know is quite grand.  As this was peak-crazy Rumple, he quickly poisons Charlotte as to compel Edmond to need to save her.  The solution?  Enter the portal to the Land of Untold Stories, where both his and Charlotte’s stories will freeze (ie stopping the poison from reaching her heart).  He agrees and the rest is…well the rest I’ll explain now…

In Storybrooke, Regina attempts to sway The Count away from wreaking havoc and killing Snow and Charming.  He ignores this then swiftly disappears after throwing a sword at her.  Later, Regina along with Henry, find Charlotte who has succumbed to the deadly poison now that she has left the Land of Untold Stories.  The Evil Queen appears, shocking her better half, and reveals she not only has dampened Regina’s magic but also has control of The Count’s heart.

At the docks, Snow and Charming find The Count, who they quickly realize is actually their vintner, Edmond.  Craig Horner played the Count so well but this scene really magnified his performance as he perfectly portrayed his inner struggle to ignore the demands of The Evil Queen.

He and the Charmings have a spectacularly action packed sword fight before he bests them, knocking them out with barrels(?).  Before he can kill them, Regina arrives but as her magic is weakened by The Queen’s spell so she’s gotta defeat him the old fashioned way! Just the way Charming taught her in the Pilot!

Regina lobs the sword at The Count, but unlike she did years ago, he is tragically pierced and killed.  Regina shows immediate remorse, reminding us of the utter lack of darkness in her heart as she begins to tear up over this innocent man’s demise.  I too was sad to see him go SO SOON because Horner really sold this character.  Within just one episode I was entranced by his story, believed his motives, and understood his struggle.  I hope he returns somehow, maybe a ghost? If he ends up down below maybe Cruella can send him back up again to Storybrooke? Maybe this was all a facade created by the Evil Queen and he’s still alive somewhere? Oh please just bring him back somehow, OUAT Writers.  And while I’m at it, can you figure out a way to bring back the Mad Hatter and Graham? PRETTY PLEASE!

The Evil Queen sassily smokes out once more leaving The Charmings, Regina, and Henry fearful of her wrath.  At Granny’s the femme-triumvirate convenes to figure out a way to take down the Queen and Three Musketeers (which used to include Robin, now Henry has the honor of being the third) try to understand the motives of the Untold Characters.  “A Bitter Draught” concludes with two characters being asked a puzzling question.  Charming receives a gift from The Queen: a charm that belonged to his father before his accidental death.  She questions him “Are you sure it was an accident?” Then there is Emma who reveals to Archie that she dies in her vision and that she believes Regina is the missing piece of the puzzle.  He asks her “Are you worried about Regina or the Evil Queen?”