The final season of Teen Wolf is intense, guys. These eight episodes have been one serious emotional roller coaster and “Blitzkrieg” proved it tenfold.  The hour was jam packed with action, pain, heartache and one huge, hard to pronounce revelation.  It was a lot, to say the least, so here’s a breakdown of five key moments that left us, as the real non-werewolf teens say, SHOOK

For much of the series the life and death of Claudia Stilinksi was shrouded in secrecy.  Her story was told sparingly from the beginning with comments that, while short, revealed the great sadness felt by her son and husband.  Her return, albeit figmental, reflected that sadness with each scene of hers having a vague sense of melancholy (and a touch of tension).  Episode 8 concluded her “resurrection” as the Sheriff (yes I’m calling him the Sheriff, “Noah” feels weird to say) recreated Stiles’ room from shear power of memory.

If I could gather a group of people right now I would, just so I could have them all give Linden Ashby a roaring round of applause.  The loss of Stiles has extended to each character in their own way.  Malia has lost her anchor.  For Lydia it is the loss of her greatest love and for Scott it is his best friend, his brother.  But his father experiences the heaviest loss of not only his son but his wife for the second time.  Holland Roden has portrayed Lydia’s pain with breathtaking detail over the course of multiple episodes.  Ashby however managed to shatter my heart into a million pieces in a matter of seconds.  I just need another classic father-son hug to glue by broken heart back together PLEASE.

2. The Ghost Riders Aren’t F-ckin Around

Teen Wolf’s greatest strength is its villains.  Unlike many shows on TV right now (namely the superhero ones) Teen Wolf’s “Big Bads” feel like a true threat – ones that make you really question the safety of even those high up on the call sheet.  Not to mention each villain is incredibly unique with varying motives and abilities (not just yet another speedster *wink wink*).  Unlike past villains on the show who took a little time before they reached their peak of mayhem, The Ghost Riders took Stiles in the second episode.  While we all know this creative choice was constructed as a means to work around Dylan O’Brien’s movie-making schedule, it provided us with the understanding that this villain was far more threatening than past adversaries.  “Blitzkrieg” upped the ante by having the Ghost Riders take not 1 not 2 not 3 but FOUR central characters – and this wasn’t even a midseason finale! Oh and they didn’t just “take” them, they yanked them from reality in a truly action packed (and of course quite heart wrenching) way.

When Liam Dunbar came to town, much like Stiles, I was apprehensive and suspicious.  I feared this newcomer was going to change the show and somehow destroy it.  I was wrong. Wrong. Wrong. Wrong.  Dylan Sprayberry has been a gift. And, while I can’t say the same for a certain person, whose name rhymes with Bictoria Borales, his relationship with said individual provided an epic showdown that left my jaw on the floor.

That group of people I wanted to gather for Linden, can we get them again for director Joseph Genier? This scene featured three separate emotion and action packed moments that were pieced together flawlessly.  The Ghost Riders entrance quickly (and shockingly) turned into the capture of Mason – the whip coiled around his neck (*clutches pillow*) laid the foundation for this violent sequence.  The scene was like a lightening bolt – or an actual Blitzkrieg – fast, scary as hell, and damaging.  Sprayberry’s “No!” after Mason’s expulsion was particularly horrifying (this is a compliment to his acting and also a request to give Liam a well needed hug).  The choreography from this moment on was pure entertainment as Liam went full throttle on the Rider: drop kicking him, throwing him around the precinct then getting himself thrown through a window, there was some serious gymnastics moves, flips, a fight for the gun and finally the most insane game of tug-of-war the world has ever seen.  I’m out of breath just recapping this scene.

This episode was a showcase of the non-teen talents of Teen Wolf.  The parents, Linden Ashby, Melissa Ponzio, JR Bourne and Ian Bohen all gave outstanding – OUTSTANDING – performances in tonight’s episode, and it is extremely necessary they be praised for it!

I’ll be the first one to admit I ALWAYS wanted Mama McCall to end up with Papa Stilinski BUT season 6 has really made me question this.  While at first it felt a bit unfounded, the brewing romantic relationship between Argent and Melissa now feels strong and kind of amazing?  Each episode this season has featured at least one adoring look, affectionate touch or loving act of selflessness between these two and “Blitzkrieg” was the culmination of all three.  Ponzio’s screams of “Wake up Parrish” were downright chilling (the woman has an impactful wail, watch 4×08 “Time Of Death” if you don’t believe me). The whole climactic scene took place in a tiny room, really giving you a sense that there was no way out – which brings me back to the all too threatening nature of Teen Wolf Villains.  If this were any other show you would subconsciously be thinking “They’re obviously getting out of this…well one of them is at least”.  But with Teen Wolf, this is never a stable prediction and I could not be more thankful for it.  Predictable TV is boring!  We all want to be shaken by twists and have our beliefs proven wrong.  In all honesty I won’t deny that some lines of dialogue are predictable (that’s the sad truth of all teen storylines!) but advances in plot and character’s actions never fail to surprise me on this show. But I digress, lets get back to the parents!

Argent’s final look to Melissa before he was whipped into a cloud of green smoke spoke volumes (he loves her!!).  Both Bourne and Bohen managed to express a novel’s worth of feelings into a single look before sacrificing themselves.  I praised Ian Bohen a few weeks ago for his ability to do just this: bring such depth and development to his character through a single facial expression and he did so again in “Blitzkrieg”.

4. Banshee Showdown In The Tunnels

Lydia Martin is my role model.  Yes, I know I’ll never be a roaring Banshee but the strength she possesses as a leader is remarkable.  This leader quality was highlighted in the episode through one important moment.  Lydia and Liam (who had split off from Scott and Malia) were confronted by a Ghost Rider but instead of Liam jumping into action, he held back and Lydia quickly stood between him and the Rider.  These two, to my memory, have never been alone together which made for a interesting look into the pack’s dynamics. 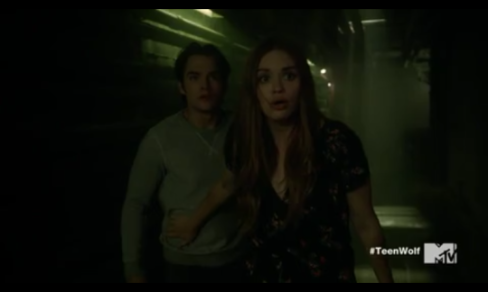 Like a bear guarding her cub, Lydia, very motherly, put her arm in front of Liam.  I actually rewinded (rewound?) this moment because it both surprised and infinitely delighted me. Lydia has officially reached her full potential.  She proudly uses her knowledge,  has accepted her role as a Banshee, opened her heart to true love, and fully matured into a leader.  Ugh, character development makes my heart so happy, guys.

It finally happened.  After six long years with our beloved Stiles we finally know his real name.  Can you believe it? I for one cannot and it’s actually making me quite emotional thinking about it.  This reveal feels like the first step towards Teen Wolf’s conclusion.  The mystery of Stiles’ first name started as a joke with Coach trying to pronounce it back when our boys were wide eyed freshman getting their “Second Chance at First Line”.  Curiosity took over in the fandom as theories upon theories swirled around social media.  We got hints along the way: it starts with an M, it’s nearly impossible to pronounce, it was his maternal grandfather’s name, it’s Polish.  The mystery felt like a secret only true fans held onto all these years.  And now we know.

“…I remember when Stiles was a little kid, he couldn’t say his first name. Not sure why, it pretty much rolls off the tongue, but the closest he could get was Mischief. His mother called him that until-

I remember when Stiles first got his jeep, it belonged to his mother. She wanted him to have it. The first time he took a spin behind the wheel, he went straight into a ditch. I gave him his first roll of duct tape that day. He was always getting into trouble, but he always had a good heart. Always. We’re here tonight because my goofball son decided to drag Scott, his greatest friend in the world, into the woods to see a dead body”

As a fan of Teen Wolf since day one, the wave of nostalgia that washed over me was intense.  Not to mention the look on Scott and Lydia’s faces as he said this all was just downright beautiful.  Scott and Lydia looked up to the Sheriff proudly remembering Stiles and realized (like every single person watching) WE NEED TO BRING OUR STILES HOME.

It looks like next week will be Stiles’ (and my sweet Dylan’s) triumphant return and I couldn’t be more happy.  I have to admit though, with Dylan’s questionable presence on set, a part of me is truly terrified that something wicked this way comes…But until then I’ll be in the Mieczyslaw Stilinski prayer circle praying he will make it to the series finale alive (and preferably on his way to college with Lydia where he will then become a detective and live happily ever after)…