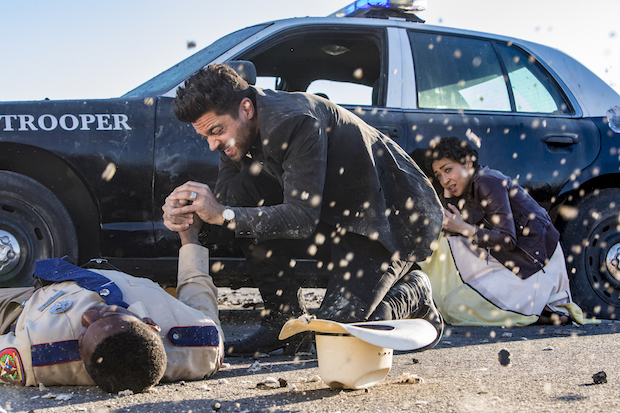 Let me just start by saying: WOW this premiere was incredible. From fade in to fade out I was smiling, cheering, laughing, and even found myself clenching my fists and shuddering from all the magnificently gruesome displays of anarchy. Where season one established itself as a means to ease viewers into this off kilter world, season two is here to catapult you right in the middle of Jesse, Tulip, and Cassidy’s batshit crazy adventure. Season one acted as a prologue to the graphic novels, broadening the story of Jesse’s hometown of Annville. In the comics, the town is blown to smithereens in the first issue, as Jesse explains to Cassidy and Tulip where Genesis came from.  Suffice to say, quite a few creative liberties were taken when writing the first season (which is in no way a complaint). For season two, Preacher is delving into the comics, in both story, style, and sheer “you can’t put that on TV” madness.

Wasting no time whatsoever, the premiere opens with our beloved UnHoly Trinity on the road.

Honestly, I missed Joe Gilgun the most and his ever-so-Cassidy rant about baby foreskins reminded me just HOW much I love him — that’s a weird sentence.

And just like that, we’re in a Dexy’s Midnight Runners music video fit with an old film filter and the gang bobbing their heads and proudly singing “Come On Eileen”.  Don’t lie, you either sang along or tapped your feet to that iconic beat.  It was a genius choice beginning the season with this playful scene – it perfectly sets the stage for the euphoric atmosphere of season two. Once they are tailed by the police, the episode quite literally explodes into utter madness, exemplifying Steve Dillon’s grisly panels…

“On The Road” was dedicated to the late Preacher Graphic Novel Series illustrator, Steve Dillon, who died this past October.  Within this divine premiere, we saw quite of few parallels, as the episode fittingly followed closely to Issue #1 and #2, with season 2 now aligning with the comic narrative. 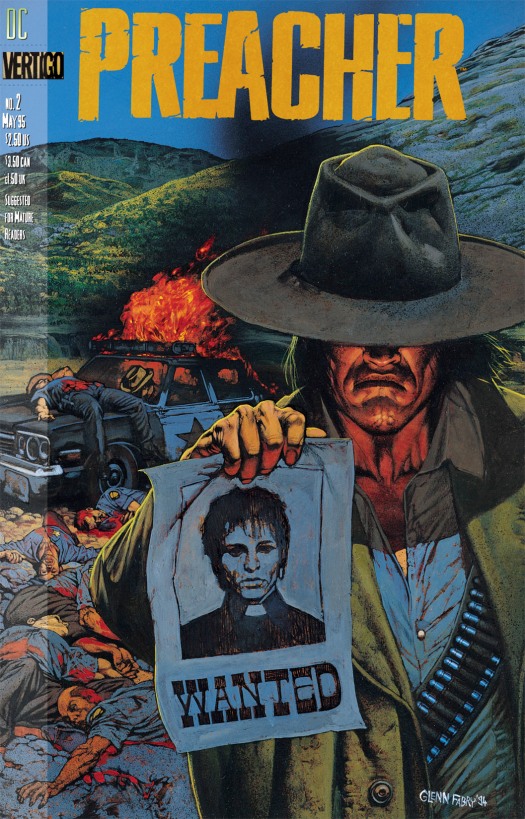 The wild, gag inducing free for all in the middle of the highway harkened back to Issue #1’s introduction of The Saint of Killers (in the comics, Jesse, Tulip, and Cassidy didn’t cross paths with SOK quite yet though).

Cassidy using one of the dead deputies as a wheel stop with his brains blasting from his skull made me YELP.  The level of gore that AMC gets away with just blows my mind. Pun intended.  The Walking Dead has its fair share of nasty kills but the fact that here in Preacher it’s real people and not zombies, makes it exceedingly more shocking…and fun, because we’re all psychopaths who love seeing people’s arms blown off.

By the episodes end, shots of the second showdown with The Saint of Killers mirrored a key moment of Issue #1, with a stare down between him and Jesse. 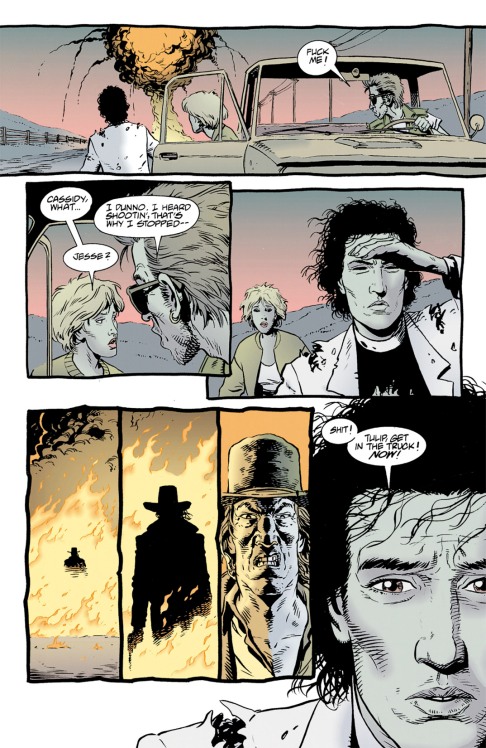 Preacher would have never worked as a TV show if the three leads weren’t perfect.  But to say Dominic Cooper, Ruth Negga, and Joe Gilgun are “perfect” is a monstrous understatement.  These three individually embody Jesse, Tulip, and Cassidy flawlessly, but it’s the synergy, the camaraderie, the rhythmic comedy of the trio together that make Preacher so special.  On top of this, what Preacher excels in (and has cornered the TV market in), is mashing up nearly every genre there is into a fluid and exciting narrative. The varying interactions between Jesse, Tulip and Cassidy are what allow this genre clusterfuck to work.  “On The Road” was a high budget action movie, a Seth Rogen comedy, a vile British sitcom, a rom-com, and a suspense thriller all packed into one episode.  What I want to highlight here though is the rom-com because it’s the one genre that keeps this show grounded while also, thanks to Sam Catlin’s stellar writing, raises the stakes on a more human-level.

In case you forgot, Tulip and Cassidy had sex last season. Viewing this season as a romantic story, it’s your run of the mill love triangle. But viewing this season as a Preacher™ Romance story (as you should), is going to be just pure FUN. The possible outcomes of Jesse learning of their affair are endless; ranging from calm understanding to brutally murdering Cassidy using every fiber of his Genesis power.  Exciting, am I right? Arriving at Jesse’s long time friend Preacher Mike’s home, alone in the car for the first time, Cass brings up the touchy subject.  Tulip replies firmly that they never speak of it.  It’s in these rare moments that the show separates itself from it’s god-given insanity.  You just tilt your head and zero in on a character’s emotion.  Joe Gilgun, I must say, is phenomenal. He hits us right in the feels with his quiet desperation for Tulip’s love then quickly bridges us back to Preacher’s reality with his gritty comedic timing.

The girl in the cage. The girl. In. The. Cage. I’m laughing right now as I type this. Bless this show. Mike put a girl in a **covered** cage to rid her of her phone addiction. What??? Tulip and Cassidy’s differing but equally hilarious reactions are what made me love this episode thaat much more.

Back to the UnHoly Trinity as a whole – take the above gif as an example.  The framing of these three throughout the episode was so visually enthralling; it was as if Seth Rogen and Evan Goldberg are controlling your mind into loving this trio even more.  There’s something about this misfit, shouldn’t look like ride or die friends but do threesome that is so entertaining to watch. Just watching, nevermind the dialogue, the mere sight of them navigating a space as a unit is captivating (and brings a genuine smile to my face because I’m an absolute nerd for this stuff).  This photo for example – which I’m not sure if it is a promotional photo or something from an upcoming episode – either way, exemplifies the visually pleasing nature of Jesse, Tulip, and Cassidy.

After the highway insanity, we find our fearsome threesome in a bed together and it’s a scene straight out of a sitcom…that is until Cass points out he could easily fall asleep if they want to go at it beside him.  Ruth Negga stole the scene though, gripping the comforter close to her chest.  She’s sharing a twin bed with her boyfriend and one night stand friend(?) – that sheer awkwardness consumed the scene thanks to Negga. Side bar: I found it funny the implications of Jesse being in the middle: considerate of Tulip’s comfort? Protective? Territorial? And am I the only one who would pay a considerable amount of money to see behind the scenes of this scene? No? Just me? I’m the only one who wants to see Joe, Dominic, and Ruth crawl into bed together? Ok. Whatever.

Alright, that’s all for my inaugural Preacher recap series! I thoroughly enjoyed the episode and I hope you did too – oh and I hope you enjoyed my article!  God Bless 😉