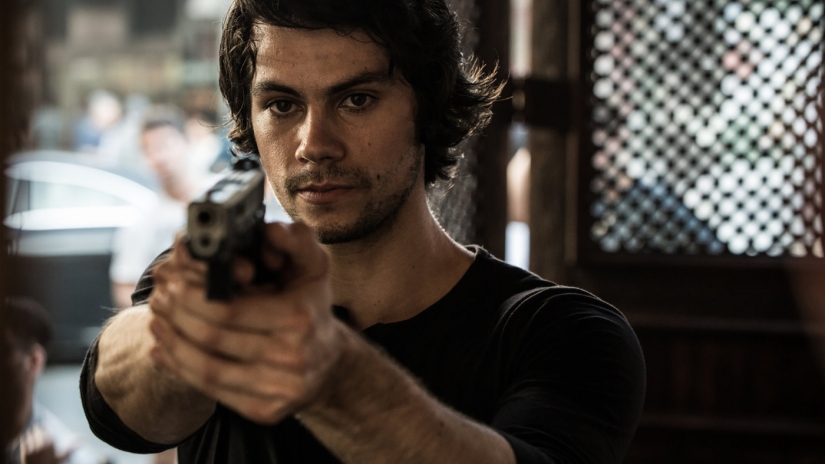 In 2010, a show that was widely eye rolled at, Teen Wolf, premiered on MTV.  Based off the 1985 lovable werewolf flick starring Michael J Fox, the series was nothing like it’s source material, that is with the exception of two characters: Scott, the werewolf, and Stiles, the goofy sidekick.

Aside from a small part in an unknown film, “Stiles” was Dylan O’Brien’s first major role as an actor.  On paper the character was a measly, awkward, spastic teenager, a human foil to the series’ supernatural creatures. But O’Brien was Stiles, layering him with truthful emotions in a world built on melodramatic fiction.

Over the course of the series viewers were witness to the rise of O’Brien’s natural talent.  By the third season it was clear he was in a different league than his co-stars as a storyline centered on Stiles put a bright spotlight on O’Brien. And he shined. Take a look. This arc coincided with O’Brien’s parlay into big studio movies with The Maze Runner trilogy’s first film.

In The Maze Runner, he played Thomas, a confused follower turned honorable leader, which seemed to mirror his own personal journey as an actor.  The film was received favorably, with critics citing O’Brien as giving a solid performance (“he elicits a hair-trigger performance…brings urgency, empathy and rippling reflexes to [Thomas]” Sragow, OC Register).  In 2016, after a successful Maze Runner sequel, O’Brien starred alongside Mark Wahlberg in Deepwater Horizon, bridging his career into big budget territory.  The heart racing, fearful nature of this large scale film could have drowned out Dylan’s rather small role in the film, but this was not the case.  As Caleb Holloway, a real life survivor of the 2010 rig explosion, O’Brien held his own around high ranking actors Wahlberg and Kurt Russell, providing a small but engaging performance that encouraged audiences to root for his survival.

Before we get to American Assassin, there is necessary adage to this story that, for me, is imperative in breaking down O’Brien’s first step toward Hollywood greatness.  In March of 2016, on the set of The Maze Runner’s forthcoming film, The Death Cure, O’Brien was injured during a stunt.  While the accident was shrouded in secrecy, both for legal reasons and O’Brien’s choice to keep his life private (a choice I commend him for), it is clear that this was no simple cut and bruise.  This unfortunate event necessitated surgery, weeks of recovery, as well as a complete shift in his professional engagements.  He also did not tweet for over 6 months, which I mention because his long awaited tweet in October, “LGM baby”, sent his fans into a state of hysteria (go check out the over 13 thousand replies that range from “You’re alive!!” to “Finally my baby is back!!”).

Immediately following his recovery (if not at the tail end of it), Dylan O’Brien took on the role of Mitch Rapp in American Assassin proving he was back and better than ever.  He also returned to Teen Wolf for two episodes, I won’t get into that, but I will say they were fantastic.  To go through such a traumatic experience though, and come out the other end still passionate and willing to pursue the job that harmed you is incredible and truly inspiring.  But he did it. And it was well worth it.

Directed by Michael Cuesta, American Assassin pulls no punches, delivering an action packed and thrilling take on counter terrorism.  The film feels very much like the progeny of the Bourne and Mission Impossible series, setting itself up, and deservedly so, for a similar multi-picture future.  But this 2017 film separates from its Spy/Assassin predecessors with its careful attention to its characters.  The combination of the film’s intensely visceral and all encompassing film technique by Cuesta and the work by O’Brien and Michael Keaton, improves upon the genre’s plot heavy (and explosives-loving) standard.

Keaton, who stars as Cold War veteran Stan Hurley and mentor to both Rapp and antagonist Ghost (played by Taylor Kitsch), fills the role of the elder, the sensei, the old fashioned, father figure.  Off the heels of Spiderman: Homecoming where he played a cut and dry villain, Keaton is more at home as someone on the right side of the law.  His no holds barred attitude comes off as routine at first (do we really need another “I’ve seen some serious shit in my time” character?). But when paired with O’Brien, the two fall in sync, complimenting each other’s performances excellently.  The combination of two generations of actors, a highly regarded ex-superhero with an on the rise ex-sidekick, gave American Assassin an extra kick.  Keaton and O’Brien each added a sense of reluctancy which worked in favor of the film’s realism.  Rapp and Hurley are extremely independent and driven characters.  By not pigeon holing them into the typical badass righteous-man archetype, the characters feel more fully formed and less of uniform action movie protagonists.

O’Brien embodied Rapp, creating a believable character whose arc was hectically transformative over the course of the film.  The first 10 minutes of the film, which felt like an hour (in the best way possible), was a shocking and truthful display of our world’s safety today.  Being caught in an act of terrorism is a terrifying event that is unfortunately not a rare occurrence in this day and age.  Cuesta immerses you into this nightmare by kicking off the intensity a moment before you expect it to.  Alongside Rapp we are aggressively thrown into mass hysteria – O’Brien’s panicked breath, eyes zig zagging, and finally his heart-stopping realization of fiancee Katrina’s demise were the final nail in the film’s remarkably intense opening scene.  And that was just the beginning.  What followed was a story of resurrection (and ultimately evolution)

championed by O’Brien’s performance.  And not just his emotional performance- his work in the physically demanding action packed scenes were major highlights in the film.  American Assassin’s action sequences were utterly creative and innovative; from the intricate body smashing boat fight to the simple stealth moves (Dylan sans-stuntman pulling himself up with a bar and onto a vent was quite impressive if you ask me!), the fight choreography was masterful and purely fun to watch.

It’s not easy for actors to separate themselves from roles they founded their careers on, but in the case of Dylan O’Brien, American Assassin was his official departure from Mieczyslaw “Stiles” Stilinski.  While he will forever be #24, the spastic human and one half of Stydia/Sterek/Sciles to his loyal fans (myself included of course), O’Brien has proven he is a multifaceted actor with the potential to be one of Hollywood’s great leading men.

I’d like to end this on a personal note…

Teen Wolf premiered in 2010 when I was a freshman in highschool and will be concluding in two weeks after 6 seasons.  I’m now 21 years old and truly feel like I grew up alongside Dylan.  At 14, Dylan (then 18, portraying a 15 year old) became the quintessential pop culture crush for me, something teenagers of all generations experience.  There was Rob Lowe, Stamos, Jason Priestley, then Dawson, Pacey, Chad Michael Murray and Adam Brody.  It’s an American cultural norm for teenager girls (and some boys, of course) to latch onto an actor who they crushed on during those crucial adolescent years.  This is all to say that Dylan became that guy for me and, as someone who relied heavily on pop culture for happiness, he became an important part of my life.  To watch him now, after 7 years, after watching him grow into this endlessly talented actor, has been a privilege and an honor.  His career has only just begun and (as much as I want to hold him tight and keep him in our under the radar bubble) I can’t wait to watch him enter the ranks of Hollywood Royalty.  He’s incredible, I’m proud to be his fan and dammit I’m proud of him.